Report of the Spring Meeting 2019

Amongst the political issues discussed were the framework agreement with the European Union, the increasing opposition against e-voting and the ongoing efforts to improve the Swiss bank situation. A presentation about the Swiss Old Age insurance by representatives from the ‘Zentrale Ausgleichsstelle’ (ZAS) provided helpful information about common AHV questions.

With a view to the upcoming federal parliament elections in October a draft election manifesto was approved. The Council decided for a questionnaire to be sent to members of parliament standing for re-election. They will be asked on their position to topics concerning the Swiss Abroad, notably the right to vote, international mobility, Switzerland’s consular network and the policy of Swiss banks with expat clients.

Your Australian Delegates intervened in the following agenda items:

There were critical voices from within the Council against the planned broadening of the electorate (ALL Swiss Abroad registered with a Consulate should be able to vote as opposed to only the Swiss Clubs having voting rights).

Katja Wallimann Gates spoke about her experience during the pilot project of all Swiss directly voting for the delegates in Australia in 2017. Carmen Trochsler followed up with facts and actual numbers and emphasised that representation of the Swiss Abroad is only possible if all Swiss can vote. Together it was one encouraging and positive statement for direct elections.

Franz Muheim (CSA from Scotland) presented results of a working group consisting of delegates from around the world, including Roland Isler, representing Australia. The group is investigating ways for the introduction of worldwide direct election of CSA delegates to take place in 2021, based on experience with pilot projects in Australia and Mexico in 2017. The electorate would be the country in general but could also be the consular district or regions.

Given the current resistance within Switzerland against e-voting in general the question remains what would be appropriate for the election of the delegates and what can be financed.

The topic will be further discussed at the meeting in Montreux in August.

This initiative by Beat Knoblauch, acknowledged by the CSA, will be passed on to ‘Presence Suisse’ in Bern. The CSA and the Secretariat have not sufficient funding in place for such an in-depth study: motion carried.

Difficulties of Swiss residents in Australia to establish a relationship with the Cantonal Bank of Geneva (BCGE), the new partner of the Organisation of the Swiss Abroad, had been addressed by Carmen Trochsler in the lead-up to the meeting. Discussions between the different parties helped to resolve the issues. Contact person for any request to open a bank account with the bank is Stephan.Vayanos@bcge.ch

Budget of the Organisation of the Swiss Abroad

During the Budget Debate and setting the goals for the future, it became apparent that the CSA needs additional funding to meet the increasing demand and complexity of business in general. A motion by Beat Knoblauch was carried to put the need for additional funding on the agenda for 2019/2020

While meeting in a scheduled session in Bern with Swiss parliamentarians before the CSA session, discussions were held on the coming Federal Elections in October 2020. Your delegates mentioned that the Swiss Abroad take notice of the mood of the political parties and their stance in matters concerning the Swiss Abroad. The parties were urged to make a more concerted effort to get the votes from the Swiss Abroad.

Beat Knoblauch thanked the FDFA officially for delegating Mrs Simone Flubacher to the Oceania Swiss Club President’s Conference, held in Sydney in September 2019. In his response (by video conference from Dubai), Mr Johannes Matyassy, Director of the Consular Directorate FDFA, congratulated the organisers and offered, wherever possible, to delegate someone from the department to attend such events. New Zealand was mentioned as the next venue to host the Oceania meeting in 2020.

News from the Department of Foreign Affairs (FDFA)

Swissinfo would like to launch an app for Swiss Abroad with a daily briefing specifically for Swiss Abroad. They also want to give Clubs a chance to raise their voice ahead of the elections by organising a roundtable discussion for later this year.

SVP Member of Parliament, Claudio Zanetti is one of the founding members of the committee to put a stop to e-voting. Being at the same time a board member of the Organisation of the Swiss Abroad, he put forward an interpellation with the goal to allow for voting material to be sent out via email.

John McGough (CSA from Hungary) put forward a motion to sue PostFinance in court, in the hope of forcing the company to grant expatriate Swiss clients the right to hold an account.

Both the OSA president, Remo Gysin, as well as senior council member and Senator Filippo Lombardi, warned against launching into long and costly legal dispute with very limited chances of winning. They believe political solutions hold more promise given a reshuffle of the Swiss government at the start of the year and parliamentary elections due October.

Lombardi said he was confident that it will be worth launching new proposals in parliament to achieve an improvement of the current situation.

The delegates in the end called for equal access to the services of PostFinance, but did not support John McGough’s proposal.

Representatives of the Old Age Insurance presented general and practical information about the topic AHV for Swiss Abroad.

The Life Certificate can apparently be returned via email.

The Council approved an election manifesto. The charter lays out a procedure to recommend candidates and political parties for the forthcoming national elections.

Based on how much they support our manifesto on what they have done in the last 4 years.

Discussed, will be revised and decided on at the next meeting in Montreux.

The results will be used as a basis for the elections in October.

According to the report of the working Group Vincent Croset (GB), fixed seats in Parliament for Swiss Abroad would require an amendment of the constitution.

The meeting closed at 6pm. 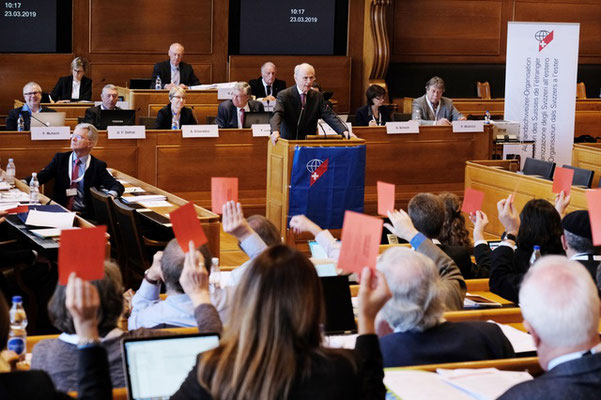 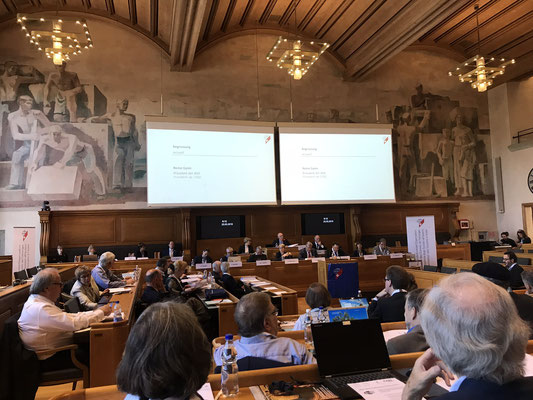 The new edition of the Swiss Review is out now!

The team of the Consulate General in Sydney plans to visit Brisbane QLD in May/June 2020 with the mobile passport station.

Registered citizens in QLD, NT and northern NSW will be contacted by email or letter two months prior to the visit with detailed information regarding dates, venues and procedures. Please ensure that the Consulate General has your up-to-date personal data and email address.

The Consulate General aims to provide this service to its compatriots rotating the locations, servicing each capital city on a regular basis.

Saturday, 5 October saw the ‘Young Swiss Citizen Celebration’ being held for the fourth time in Melbourne. 13 young Swiss who recently celebrated their 18th birthday, and thus became fully-fletched Swiss citizens, followed the invitation by the Hon. Consul, Manuela Erb, to a luncheon at the Swiss Club of Victoria. They were accompanied by families and friends.

CSA elections in 2021: because the Swiss e-voting systems are on hold until further notice, direct election via e-voting of the CSA delegates (as per pilot projects in Australia and Mexico in 2016) will not be possible. The CSA Delegates in Australia will have the job to organise the next elections without certainty of assistance at this stage. Importance is given to umbrella organisations in countries where they exist, which will have the task to organise fair and democratic elections. Default solution is the ‘old System’ each country carried in the past.

Switzerland is a success story, but it will have to evolve under fast changing international conditions. Therefore, foreign policy will become more important for Switzerland’s prosperity and security. Starting from these reflections, Federal Councillor Ignazio Cassis established the AVIS28 working group in 2018 with the aim to define a coherent and adaptive foreign policy vision for Switzerland for 2028. AVIS28 is a source of inspiration and new ideas, and at the same time, it should initiate a broad discussion on the future of Swiss foreign policy. Switzerland needs the courage to change. Its foreign policy must become more focused, networked and agile. Switzerland should also work more closely with like-minded states, like Australia and New Zealand, towards their common goals.

An update on e-voting and the federal election 2019

A lot has happened lately with regards to e-voting. There has been growing resistance and a fair bit of scare-mongering in Switzerland regarding the introduction of e-voting. Whilst the advantages are obvious to the government and the Swiss Abroad, sceptics argue that the trust in the democratic process is compromised due to e-security uncertainty and the cost of developing a secure system is also a concern. Earlier this year, a broad alliance of political parties has been collecting signatures for a popular initiative. Their aim is to ban the introduction of e-voting for at least five years.

Banking problem: No solution for the Swiss Abroad

OSA PRESS RELEASE: Bern, 13 June 2018 – The Organisation of the Swiss Abroad (OSA) representing the interests of 751,800 compatriots living abroad, is disappointed that the Council of States today rejected Motion 17.3626 by 30 votes to 9 with 4 abstentions. The Council of States has decided not to follow the majority of its Foreign Policy Commission (APK-S) and has rejected a motion calling on PostFinance to accept Swiss Abroad on similar terms as citizens residing in Switzerland. The problem that has existed for our compatriots living abroad for ten years remains unresolved.

OSA PRESS RELEASE: Bern, 30 May 2018 – The Organisation of the Swiss Abroad (OSA) is relieved that the Council of States has today decided to follow the recommendation of its Commission on Social Security and Health (SGK-S) to delete the amendment to Article 4 (1) in the context of the supplementary benefits reform. This means that the current rules remain in place. Last March, the National Council approved an application whereby Swiss Abroad would have had to pay social security contributions (AHV) for at least ten years in order to qualify for supplementary benefits, which would have discriminated against Swiss Abroad.

On 10 March 2018, at he CSA meeting in Bern, the executive of the OSA announced that it had entered into a partnership with the Geneva Cantonal Bank (BCGE).

More information is available under the topic Swiss Banks.

The Organisation of the Swiss Abroad (OSA) would like to know about difficulties you have encountered in the area of health insurance and the practical problems that you face as a Swiss person living abroad. This may be of specific relevance to those living temporarily in the Oceania region or those in need for travel insurance when visiting Switzerland. By the same token, if you have had positive experiences or wish to share good practices, please do so!

The purpose is to look at ways of improving the situation of Swiss people living abroad in this regard.

You can send your experiences and suggestions to us delegates and/or directly to the head office in Bern: info@aso.ch